In October 1947 Furtwängler conducted an opera for the first time in more than three years! And it was Tristan und Isolde at the Berlin Staatsoper, now established in the Admiralspalast following the destruction of the opera house ‘Unter den Linden’.

He was well supported by faithful singers such as Ludwig Suthaus, Erna Schlüter and Gottlob Frick, yet also by a female stage director well acquainted with the world of Wagner, the soprano Frida Leider. As for the decorator Lothar Schenk von Trapp, he was one of those who brought new blood to the scenography. And since the recording has survived from this evening of 3 October, though without the first act, we shall have to be satisfied in this connection with a picture: the scenery for Tristan’s ship. 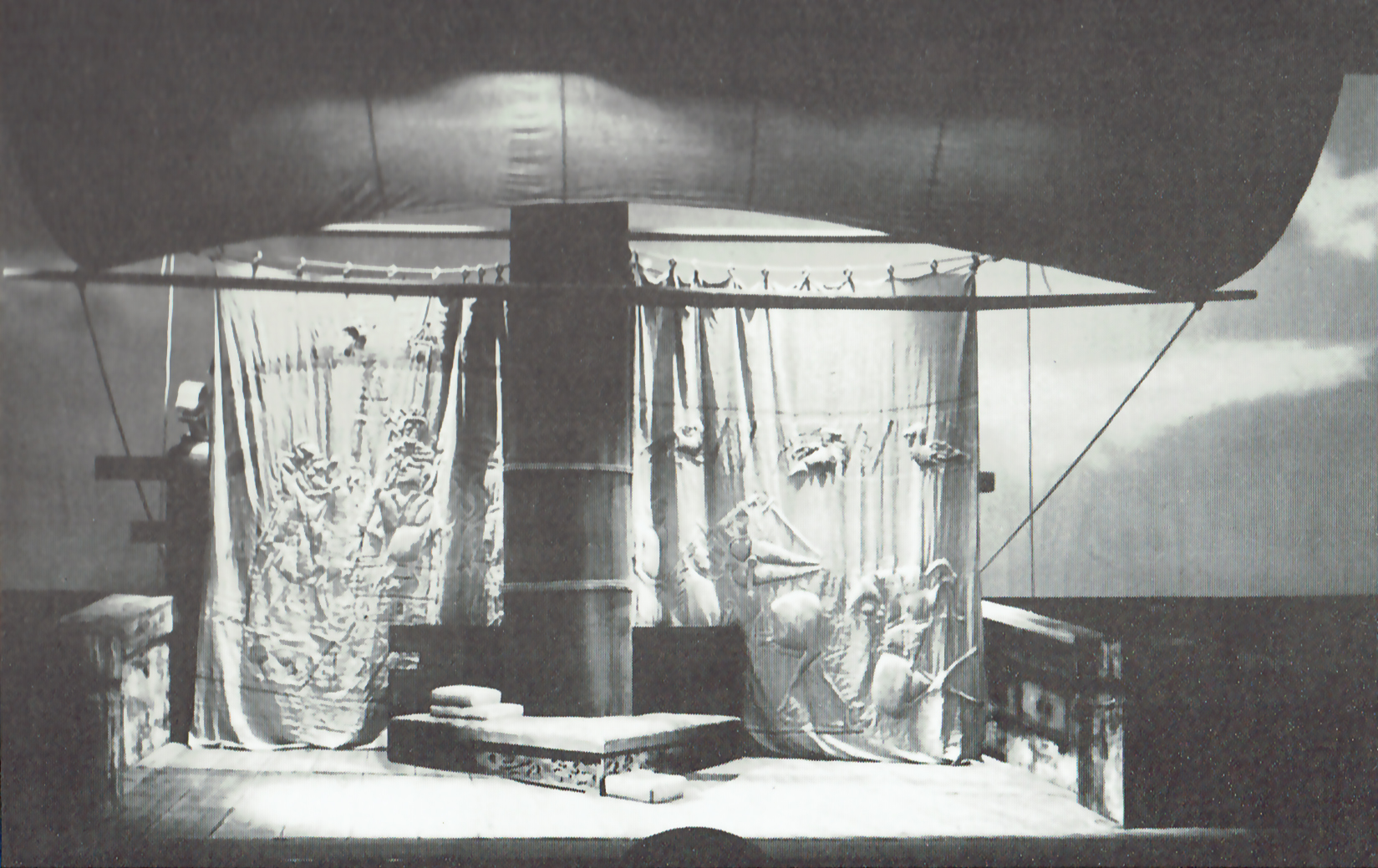 The facsimile of the programme also reveals the economic situation in Berlin at the time: it has only a pretty meagre four pages…

We have the almost complete list of Furtwängler’s concerts. Yet we also have, through online documentation or through the acquisition of documents, some printed programmes. And there is sometimes a surprise, for example a last-minute programme change. This is the case with a concert in New York, where Furtwängler withdrew from a work… The reason? Read the attached pdf document and you will be astonished. 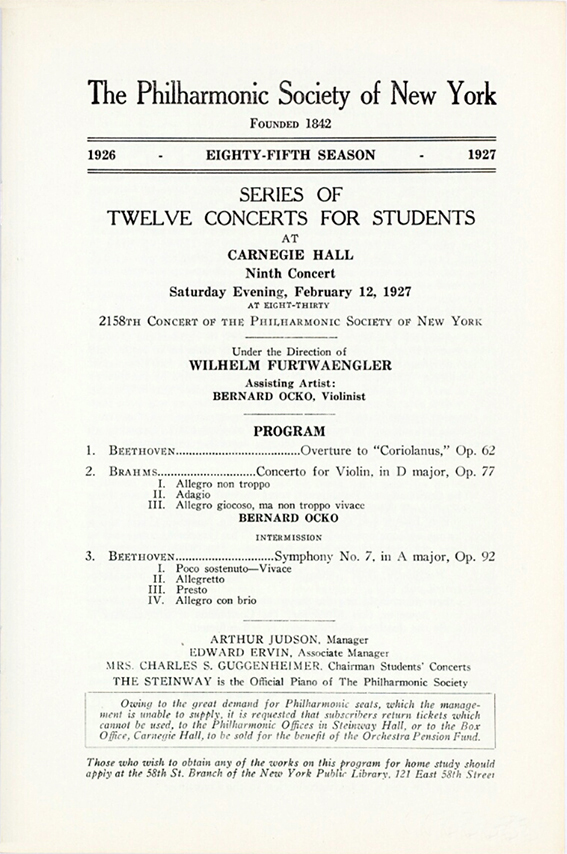 We announced it more than a month ago; today is the day we offer on our site, to be downloaded by our members, a monument in Furtwängler’s discography: Brahms’ German Requiem, as recorded by Swedish Radio on 19 November 1948. 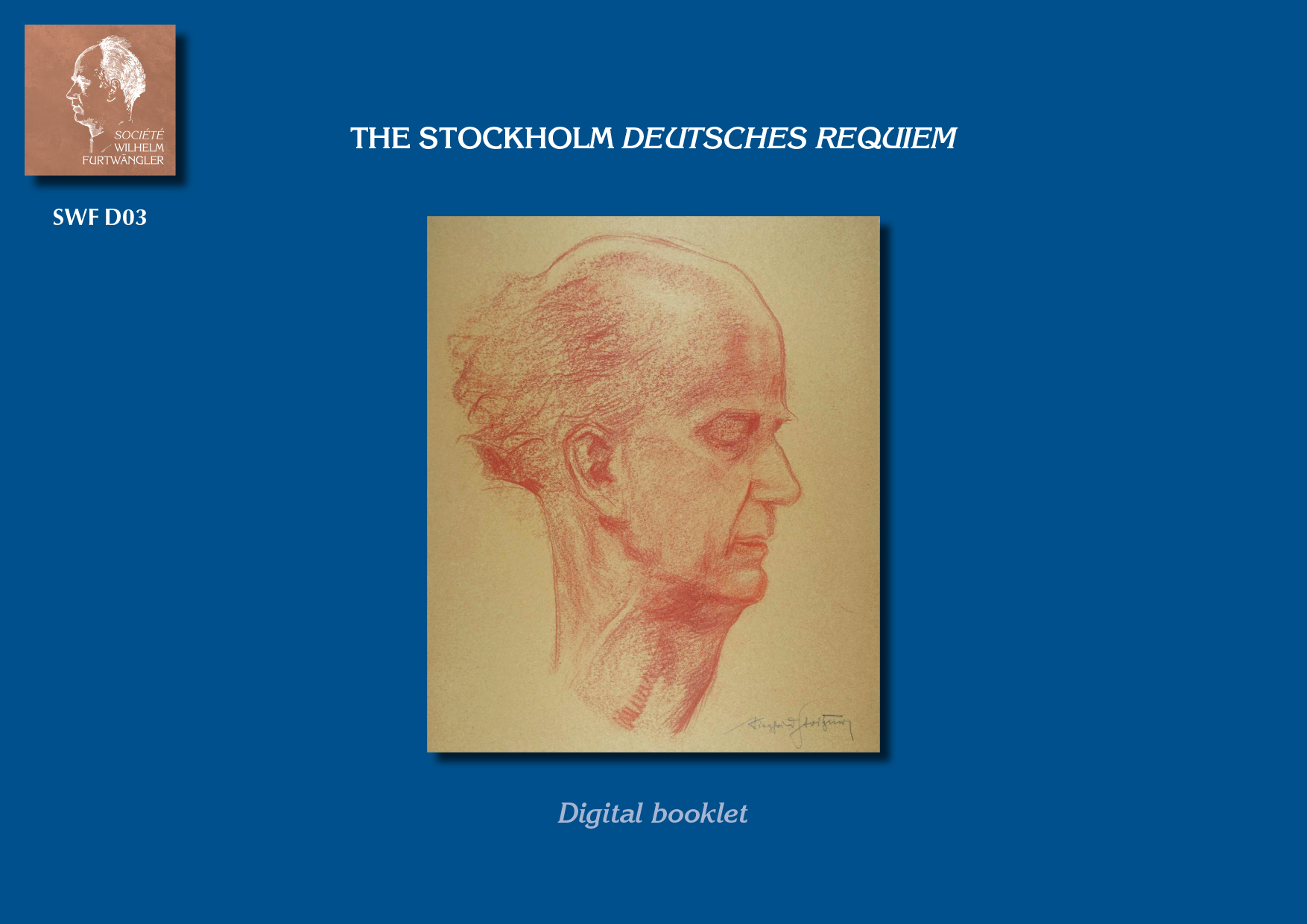 At last restored to high definition, with an exceptional dynamic and a clarity of sound that enables all the details to be heard, here is a performance imbued with truly elegiac depth. The press reports, translations of which are reproduced in the booklet, insist on the serene wisdom that emerges from Furtwängler’s reading. To be sure, he does not back away from the spectacular character of certain passages (in the second and sixth movements notably), yet this immense funeral cantata takes on its veritable dimension in the ‘soft’ passages, such as the intermediate movements. And as for the last movement, it is a door open onto a beyond that becomes a reconciliation with death.

We emphasise the unique aspect of this production, not just because of the high definition but no less for the unparalleled editorial scope: the facsimile of the programme and a very copious and extensively documented booklet, for which we once more thank our Swedish friends. 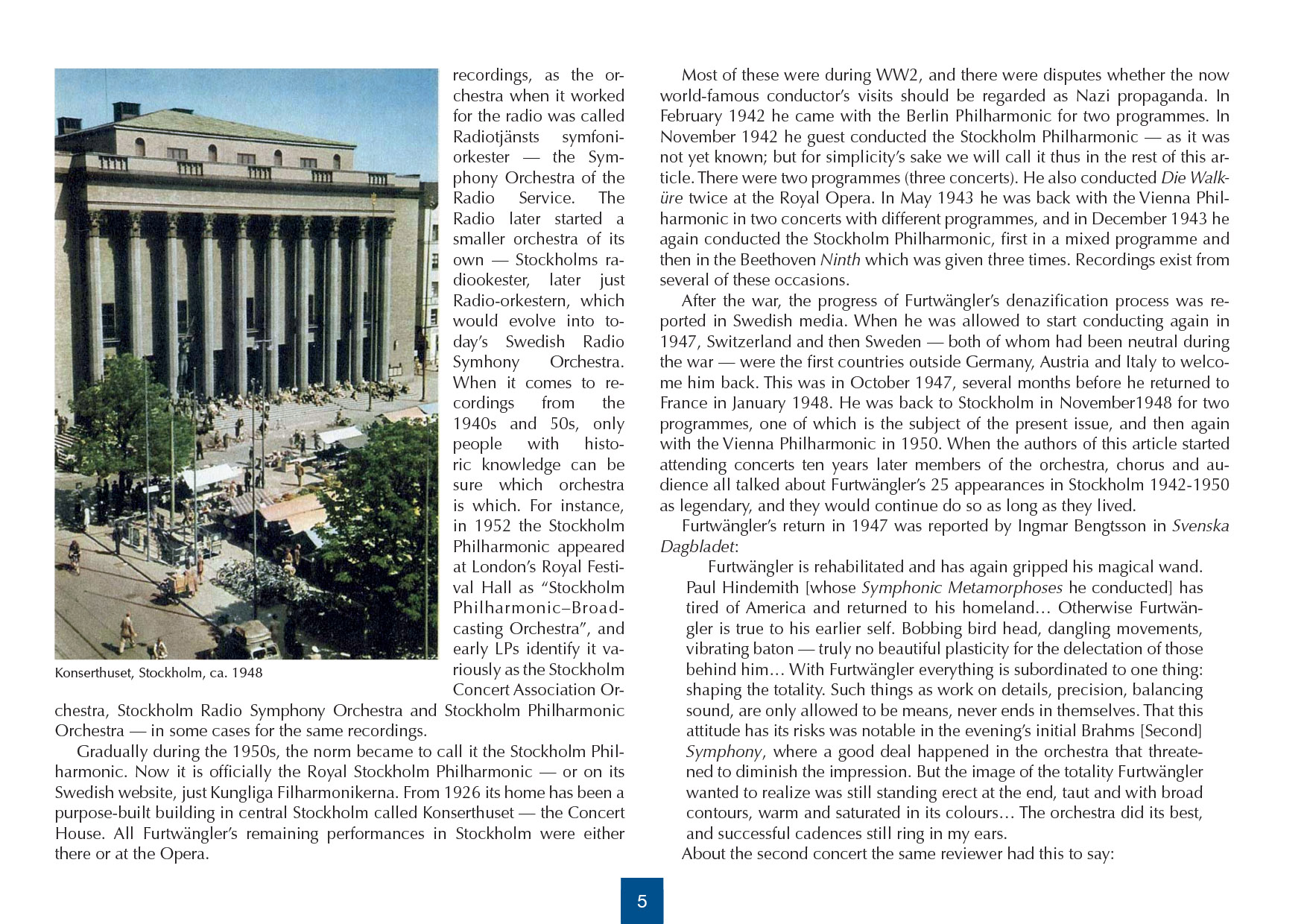 The preparation of the release (19 October) by the SWF of the Stockholm German Requiem is also an opportunity to make a few points about the performances of this masterpiece under the baton of Furtwängler.

A few surprises discovered in the course our research:
— though he conducted the work a good number of times in Vienna, it was always with the Symphonic Orchestra (or its predecessor), never with the Philharmonic;
— he conducted it only a few times in Berlin, even though it was there that he had available to him one of his favourite choruses, that of Bruno Kittel;
— his position within the Brahms Gesellschaft enabled him to programme the Requiem three times at great Brahms festivals: Heidelberg in 1926, Jena in 1929 and that of the centenary, in Vienna in 1933;
— he never recorded the work for a disc, Walter Legge (EMI) preferring Karajan after the performances in Lucerne and Vienna in 1947. Happily, there are the radio recordings.

We offer you a small study (English version) consisting of the list of these concerts, a concise biography of all the soloists, and a more detailed portrayal of the Jena performance in 1929. 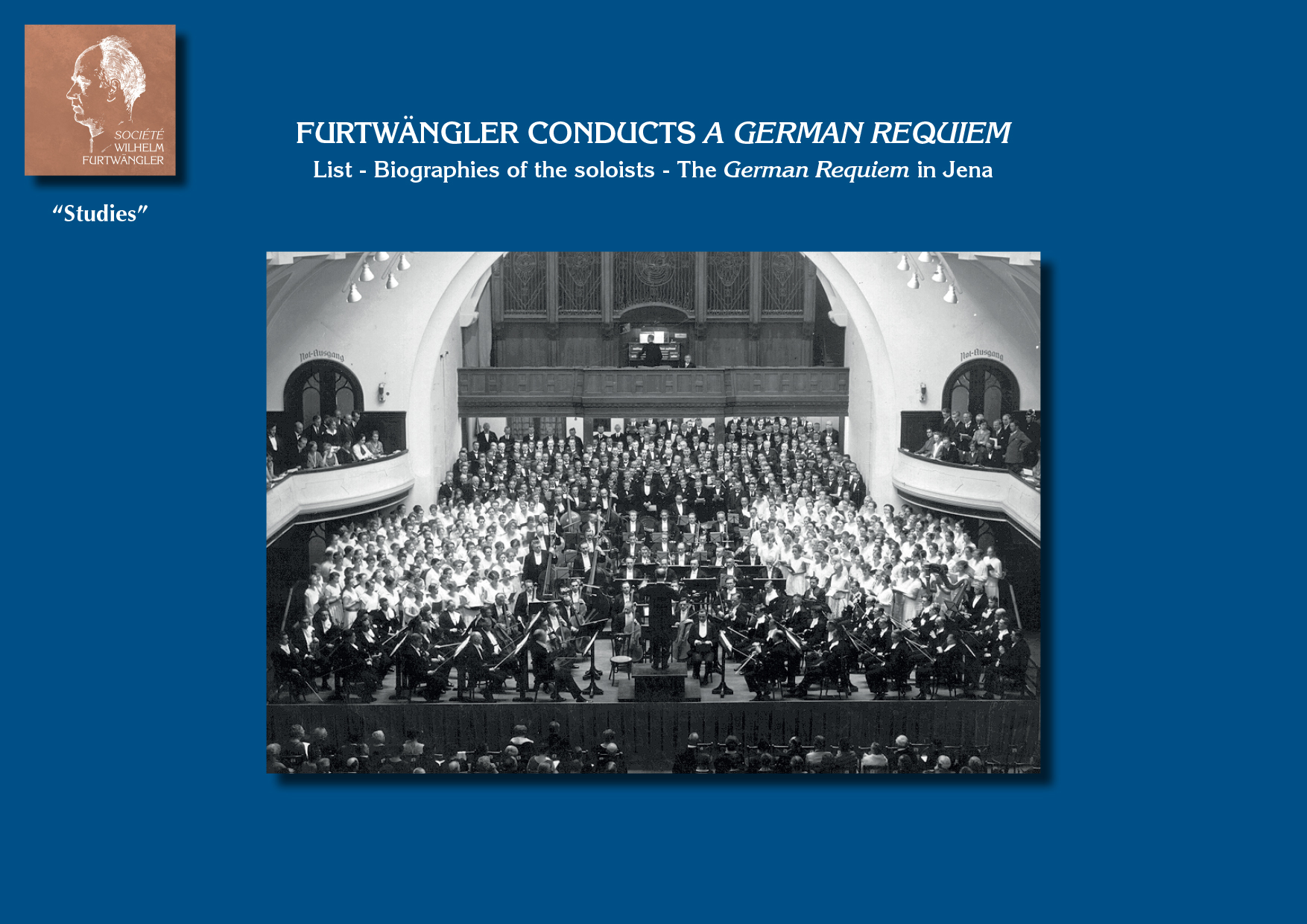 An association is unlike any other enterprise. It relies on volunteer cooperation, in particular with regard to deliveries. Consequently, and until 9 November, we cannot guarantee the postal delivery of our CDs. So, if you place an order, please be patient! 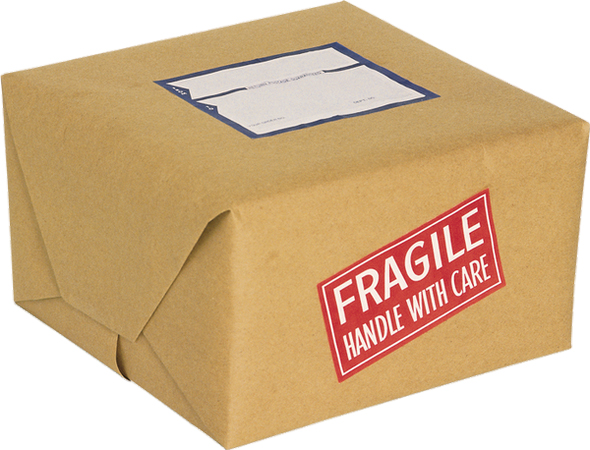 On the other hand, downloading is in no way handicapped by a lack of manpower. So make a note: 19 October for Brahms’ Requiem!

It has become ever more difficult to find a space in Paris suitable for our lectures — one of the SWF’s main activities since 1969 — the reason being the demands of the owners with regard to availability and price. 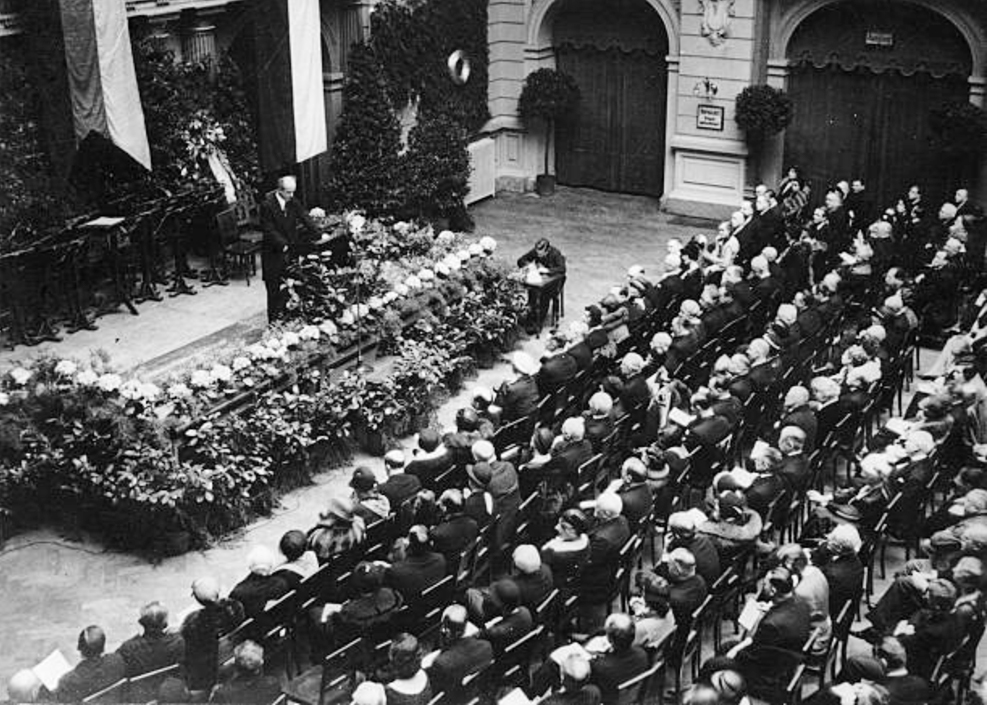 This is why we have still not been able to present to you the programme of the new season.

We are going to produce a ‘pilot’ podcast that will be tested by our management team before general release. So, please be patient! Thank you.

So it is on 19 October that the Stockholm recording of the German Requiem will be available for downloading.

As a foretaste here are three extracts:

– Part of the conclusion of the first movement (from bar 144);

– The orchestral transition with its phenomenal crescendo (bar 42) in the second movement;

– An extract from the fourth movement (from bar 24).

Technical constraints have obliged us to offer you these extracts in CD quality. We leave you to imagine how it will all sound in high definition 24/96!