Programme of the Staatsoper, Berlin, 3 October 1947

Even more than the spring of 1947 it was the autumn of that same year that marked the return of Furtwängler to the European musical scene. He had a series of concerts in Berlin with the Philharmoniker and also with the musicians of the Staatskapelle, in Hamburg with the orchestra of the recently formed Norddeutsche Rundfunk, in Vienna with the Philharmoniker and the Symphoniker, in Stockholm, in Munich, at the head of the Gewandhaus of Leipzig and later of the Suisse Romande Orchestra…

In between all these dates he found the time to get back on track with opera, at the Staatsoper of Berlin, that, its opera house destroyed, had taken up residence in the Admiralspalast, a huge hall built more for revues and operettas, like the Châtelet in Paris or Drury Lane in London. Until the Staatsoper was rebuilt, this hall would serve for opera, concerts and large political meetings of a certain Germany, the one that would become that of the ‘east’, the future GDR.

A great classic on the billboards: Tristan und Isolde. Three dates were planned, the 3, 24 and 30 October. A glance at page 4 is enough to confirm the extraordinary vivacity of this house with regard to its calendar and the diversity of the programming.

We are acquainted with this performance, at least Acts II and III, as the tapes have survived.

To accompany the sound here are a few photos taken during the rehearsals. 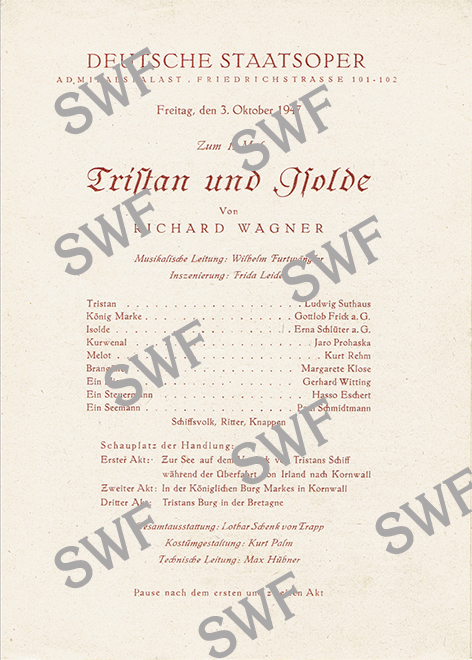