Programme for the concert by the Berlin Philharmonic in The Hague, 23 January 1940

In January 1940 the Berliners and their conductor undertook a short winter tour, hardly comparable with those which before the war had taken them as far afield as Britain. Their only venture abroad now would be to The Hague, in the great hall of the Building of Arts and Sciences which Furtwängler knew well.

This concert was included in René Trémine’s list of Furtwängler’s appearances, but without details of the programme. That gap can now be filled, especially as the poster advertised a work which Furtwängler held dear and in which he presented his orchestra’s soloists: Handel’s Concerto Grosso op 6 no 10.

We might mention in this connection that the three first desk players at the front of the stage here were to make successful careers in major orchestras. Erich Röhn became the concertmaster of the postwar Orchestra of North German Radio. After leaving the Berlin Philharmonic for a time, Siegfried Borries returned to them at the beginning of the 1950s. As for Tibor de Machula, he left the Berliners in 1947 to become the long-serving principal cellist of the Concertgebouw of Amsterdam, first under the baton of van Beinum and then that of Haitink.

It is surprising to find that the promoters of such an exceptional event — the poster proclaimed a "Gala Concert" — did not see fit to include even the briefest note on the works, the orchestra or its conductor in the printed programme.

Less than four months later Hitler's troops invaded the Netherlands and Belgium without warning, to the horror of their peoples who had believed that their neutrality would protect them from his lupine hunger for conquest. 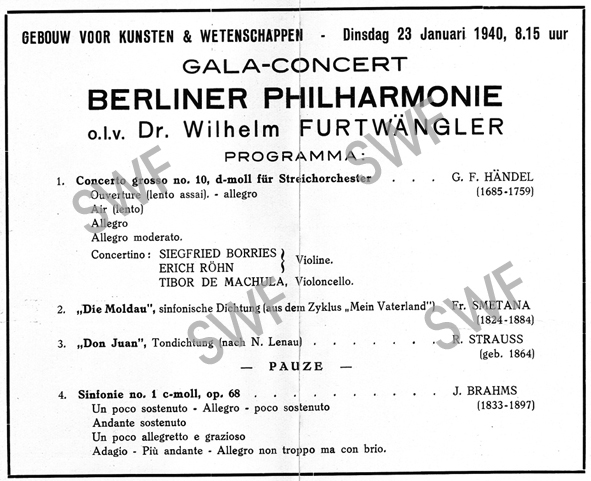