Programme for the concert of 3 November 1940, Berlin

This programme is one of a set of eight acquired by the SWF from the Berlin Philharmonic concert seasons of 1940/41 to 1942/43. A few general observations before we open them. This was wartime, and thus a period of restrictions, but the quality of the documents is surprising: cardboard covers with two-colour printing, at least one photograph, analyses of the works — and no reference to the government of the day; it is as though we were in a world without the swastika. Finally, some programmes include a section on "Philharmonic News", or announcements of forthcoming concerts, which enable us to follow the orchestra’s activities. And we might note that this concert was given three times, and hence to a total of more than five thousand listeners!

Open this programme. Turning our backs on the competing adverts by Electrola and Telefunken (for Beethoven’s Fifth and Tchaikovsky’s Sixth, by Furtwängler and Mengelberg respectively), leaving the Tannhäuser overture unopened, executing a glissando past the Schumann Concerto (which will save us having to discuss Mainardi ...), and forgetting even the Pastoral (but can we really forget the Pastoral...?), let us focus our curiosity on the work that begins the second half of the concert: Theme and Variations for large orchestra, after Adalbert von Chamisso’s poem "Tragische Geschichte".

Its composer, Emil Nikolaus (Freiherr) von Reznicek, was a contemporary of Richard Strauss. Born in 1860, and thus celebrating his eightieth year in 1940, he died in 1945, having shone essentially in the firmaments of the symphony (of which he wrote five) and the opera, including one made popular by its overture: Donna Diana.

With a genuine gift for melodic invention, and much lighter in touch than many of his Germanic contemporaries (notably Pfitzner), his orchestration is marked by a sumptuous palette, comparable with that of Busoni as much as Strauss, but also by the dance accents of his Bohemian homeland. And a hallmark of his work is the humour which lies just below the surface of many of his scores, including his elaboration of the Tragische Geschichte.

The composer entrusts Chamisso's poem (one wonders who he was mocking) to a baritone who appears only at the very end of the work and sings for just a minute and a half! But the composer was perceptive enough to see that the singer could be dispensed with, and it is this "absentee" version that Furtwängler presented in a number of concerts, in Rome, Vienna, Leipzig, Hamburg and Berlin, and conducted for the last time on these evenings. In the absence of the singer, the Berliners did well to reproduce the poem itself (on page 13 of the programme), and we have taken the trouble to present it in English (in a separate pdf), just to make sure that no-one mistakes the truly tragic nature of this tale..... 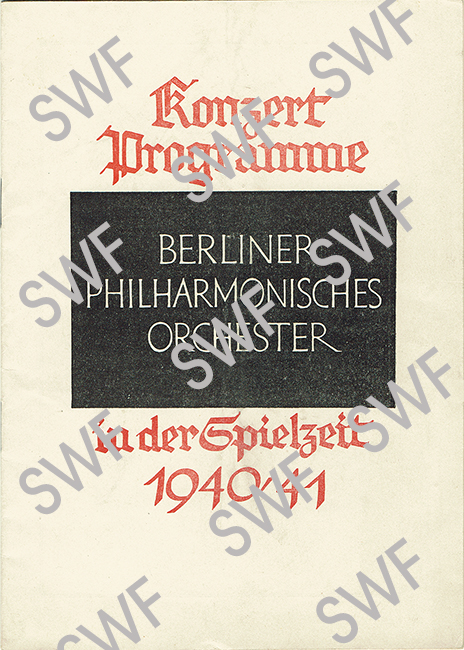