These concerts are familiar to us; that of 18 May was broadcast and recorded, and has appeared on disc, though scattered over separate issues.

The printed programme is in marked contrast to the normal practice of the time, and presents a quite modern appearance. Was the square format then little used? Is it the presence of the soloist, Wolfgang Schneiderhan, that brings it all closer to our time? Is it the advertisement on the second page, featuring records that are still familiar to us? Isn't it just as much the inside back cover, devoted to an announcement by the association for the construction of a new Philharmonic Hall in Berlin. We find ourselves caught in the spiral of time. Ten years later, the new Philharmonie would be inaugurated, architecturally far removed from its predecessor and well ahead of its time.

The programme is along classic lines, even as regards Stravinsky’s divertimento The Fairy’s Kiss, which Furtwängler had previously given some fifteen years earlier.

The musical analyses are signed P.W, for Peter Wackernagel, whose essays are found on many of the Berliners’ programmes. He was attached to the National Library of Berlin, where he was director of the music department between 1945 and 1950. 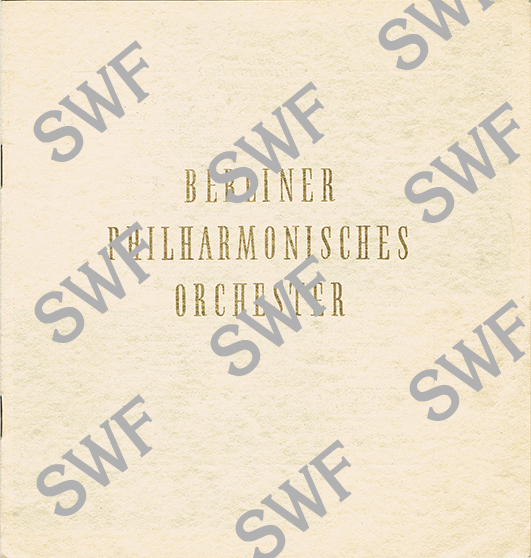