Furtwängler at a concert

Furtwängler "in a concert", we know that well enough! Just think of it, he conducted more than 3000! However, as for Furtwängler "at a concert", in other words attending a concert, we have in fact very few records.

Here is a visual document: a private concert in Berlin in 1936, at which Maria Reining gave a recital of lieder by Brahms. 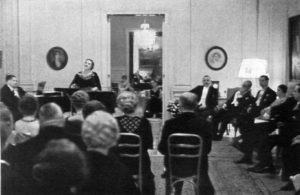 After a conversation with his friend André François-Poncet, the French ambassador in Berlin, Furtwängler was able to settle down comfortably in order to appreciate the singer’s artistry from amongst the audience for once.