This programme is one of a set of eight acquired by the SWF from the Berlin Philharmonic concert seasons of 1940/41 to 1943/44. A few general observations before we open them. This was wartime, and thus a period of restrictions, but the quality of the documents is surprising: cardboard covers with two-colour printing, at least one photograph, analyses of the works — and no reference to the government of the day; it is as though we were in a world without the swastika. Finally, some programmes include a section on "Philharmonic News", or announcements of forthcoming concerts, which enable us to follow the orchestra’s activities. And we might note that this concert was given three times, and hence to a total of more than five thousand listeners!

We know the significance of these concerts for Furtwängler’s admirers — they were the last that he conducted in the old Philharmonie, at 22 Bernburger-Strasse in the Steglitz district, three weeks before it was destroyed by an incendiary bomb. It was more than 60 years since the orchestra had set up home there, when the hall was a huge edifice housing a roller-skating rink. After the destruction of the building during the night of 30-31 January 1944, it would be almost twenty years before a new one bore the name of the Philharmonie.

There is nothing remarkable about the programme, except that the Beethoven Violin Concerto is placed in the hands of one of the Konzertmeister, Erich Röhn, who plays it with rare sensitivity. Furtwängler certainly featured soloists from the orchestra in concertos on occasion, but this also shows the need to compensate for the withdrawal of some of the outstanding soloists in Germany or its allies, who, though still active, were concerned about the increasingly frequent bombing raids on the capital

The recording of this concert also provides our only opportunity to hear one of the great Strauss extravaganzas under Furtwängler's baton. He did not perform them very often and was undoubtedly less attracted than other conductors to these scores, whose luxuriance sometimes masks a relative poverty of invention, particularly in matters of harmony. Visiting the conductor’s dressing room after a performance of Ein Heldenleben, his mentor Walter Riezler found a grinning Furtwängler expostulating "What kitsch!"

The effects of the probable wartime restrictions are evident — the programme no longer has a stiff cover. But we should also note that simply multiplying the four dates of the concerts by the number of seats in the Philharmonie gives a total of over eight thousand listeners! The other concerts in the subscription series, given by Karl Böhm, Oswald Kabasta or Volkmar Andreae (some of which were in any case cancelled), were scheduled to be given only twice… 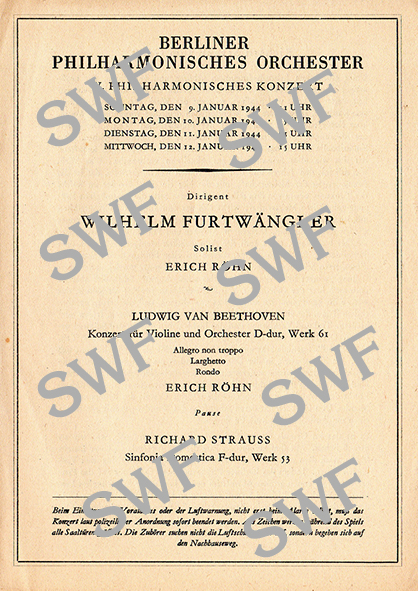