Programme for the concert of 10 October 1921 in Berlin

n 1921 Furtwängler was undoubtedly the rising star among Germany’s orchestral conductors.  Crowned with his achievements in Mannheim, he succeeded Richard Strauss at the head of the Berlin Staatsoper’s orchestral season and Mengelberg in the prestigious "Museumkonzerte" in Frankfurt; he was chief conductor of the Vienna Tonkünstler Orchestra and head of the influential Gesellschaft der Musikfreunde in the same city, and since 1917 he had appeared several times with the Berlin Philharmonic.  And he was on good terms with Wolff und Sachs, the most powerful concert agency in the German capital.

It was Louise Wolff who arranged for him to conduct a series of five concerts during the winter of 1921-1922.  We should bear in mind that, contrary to what we might suppose, the Berlin Philharmonic then had only a modest core of orchestral forces, considerably less than those of the Leipzig Gewandhaus, the Concerts Lamoureux or the New York Philharmonic.  It was with this ensemble of around sixty musicians that the Berliners gave most of their concerts, making a living by providing their services to soloists, choirs or concert organizers; they played some 125 concerts in the 1921-1922 season!  In practice only the Wolff und Sachs agency had the resources to promote major concerts, starting with the "ten Philharmonic concerts" conducted by Bülow, then Strauss, then Nikisch, for which the orchestra was brought up to full symphonic strength and each concert was preceded by a sufficient number of rehearsals rather than the usual single “Generalprobe”.  To appear at one of these rare occasions was thus a mark of distinction.

The programme for the first concert of the series included the Brahms Alto Rhapsody, which the great conductor was to include from time to time in his programmes, and Liszt’s Mazeppa, which by contrast made an appearance as fleeting as that of the hero of Victor Hugo’s poem.

Sigrid Onegin (1889-1943), born in Stockholm to French and German parents, was undoubtedly one of the greatest contraltos of her day. The Barth'schen Madrigalvereinigung was a Berlin choir led by Arthur Barth, apparently a namesake of the great piano teacher Heinrich Barth. 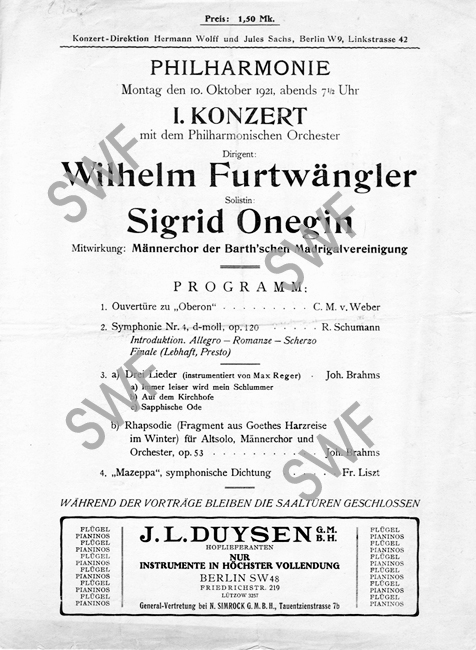