Programme for the concert in Berlin, 30 January 1922

This programme is interesting for several reasons.

The concert was the fourth in the series of five that the Wolff und Sachs Agency (which also managed the annual “Ten Philharmonic Concerts”, the “real” Berlin Philharmonic season) established for Furtwängler employing the services of the Philharmonic. This explains why the orchestra’s name does not appear in large letters, as would have been the case if the conductor had been invited to appear during its own season. Louise Wolff, the real driving force of musical life in Berlin, did as much for no-one except Bruno Walter.

Arthur Nikisch had died the previous week, and contenders were already jostling to succeed him. It was by chance that Furtwängler found himself in the right place at the right time. On 26 January he had conducted the memorial concert for Nikisch in Leipzig, on 3 February in Berlin that of the Staatskapelle, whose concert season he conducted, and on 6 February the concert by the Philharmonic in honour of the man who had led them for more than twenty-five years. On 13 March he would give Beethoven’s Ninth Symphony with the same orchestra (the concert referred to at the bottom of the programme).

These fortuitous circumstances worked in Furtwängler’s favour simply by placing him on the spot, and this certainly played a part in his being chosen for the tenure of both the Berlin and Leipzig orchestras.

Furtwängler programmed Berlioz’s Symphonie Fantastique (“Phantastique”) several times during this period, and it is regrettable that he no longer included it in his concerts in later years. The Second Concerto of Rachmaninov also gradually disappeared from his repertoire.

Eduard Erdmann, a great pianist renowned for his interpretations of Schubert and an original composer, is today rather a forgotten figure, though in recent years at least some of his works have been revived[1]. Furtwängler gave his First Symphony, op 10, during his time as conductor of the Frankfurt Museum concert series.

Finally, one wonders whether it was economic circumstances which limited this programme to one double-sided sheet! 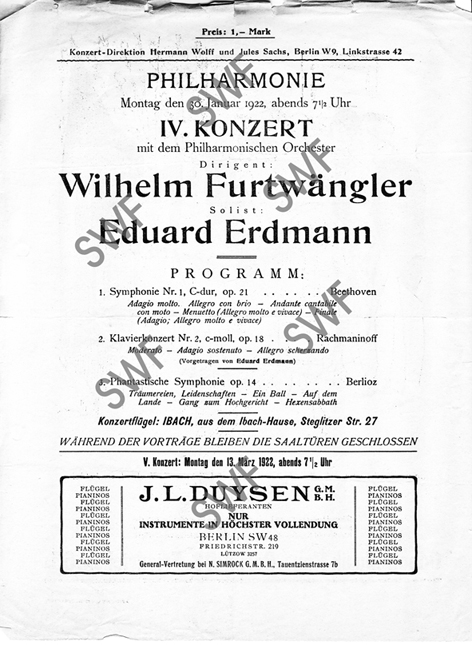