While we are familiar with Furtwängler’s activities at the head of the Berlin Philharmonic, from his first concert in 1917 and especially from his appointment in 1922 until 1954, rather less attention has been paid to his work as director of the concerts of the Berlin State Opera Orchestra, in other words as head of the Staatskapelle. But this was a very prestigious position, and Furtwängler was proud to succeed Richard Strauss, who had been happy there after having had little success in his single year as conductor of the Philharmonic.

It was in Lübeck that Furtwängler first added Beethoven’s Ninth Symphony to his repertoire, the starting point of a long association.

The printed programme is very unusual, and makes one wonder about the audience for these concerts. Programmes of this period generally feature a variety of advertisements, invariably including some for pianos but also for perfumes, clothes, even automobiles. Here, besides those for Steinway, Blüthner, Grotrian-Steinweg and others, we find little except ads for purely musical products, including newly released scores by Strauss and Schillings, or for musical tuition.

The very detailed analysis of Beethoven’s Ninth is the work of Max Chop (1862-1929), musicologist, editor, and publisher of the Staatskapelle’s programmes from 1910 onwards.

An amusing detail reveals something of the musical practices of a century ago. Unhelpfully for those wishing to plan ahead, a note at the bottom of the page with the concert programme itself states that “The 10th symphonic concert will probably take place in mid- or late April”. In fact it took place on 4 May! 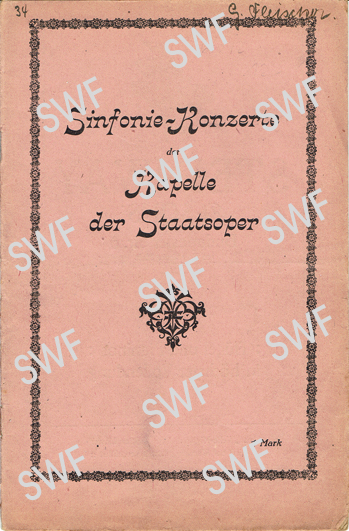