The booklet runs to a very dense 40 pages. True, after an analysis of each of the three works, particularly Walton's Scapino Overture which was receiving its Viennese première, we are offered “Musik-Blätter” with the Vienna Philharmonic’s news and a series of articles on various musical topics. But reading through these pages nonetheless gives rise to some astonishment.

An article on Mahler was certainly welcome after all the years during which he was sidelined, but it seems odd that not a single Viennese writer could be found to celebrate him, and that they had to unearth the old, though excellent, article by Richard Specht from 1913.

Was it really necessary to devote four pages to “introducing” Furtwängler to the Viennese public?

The essay on César Franck is typically Germanic and minimizes the French side of his influence. Or — worse — it refers to Bruneau and Charpentier but obscures Franck's real lineage through Duparc and Chausson.

Kurt Blaukopf (who could have been entrusted to write the article on Mahler!) treats us to a course in philosophy and general aesthetics, not excluding hermeneutics ...

Finally, a modest breath of fresh air is provided by the notes on the Philharmonic's instrumental sections; this is the fourth and last installment, focusing on the less often exposed instruments, harp and percussion.

Whoever owned this programme, one of a series acquired by the SWF, was in the habit of annotating his valuable booklets. What strikes us most is the definitive verdict on the front page: "sehr schön! " 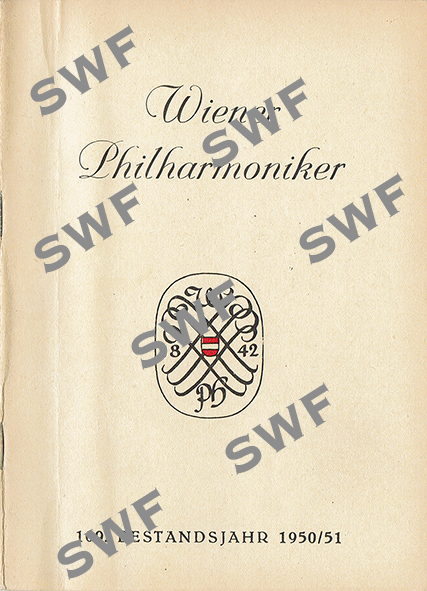