We cannot count the numerous Beethoven Ninths that Furtwängler conducted in Berlin between 1920 and 1942, particularly with the Bruno Kittel Choir.

After his return, Ninths increased in frequency in Vienna (four series of performances), Bayreuth (two), Salzburg, Lucerne (two), and Italy, but they became decidedly rare in Berlin. Was there a problem with the hall? The platform of the Titania-Palast was certainly cramped. Or a problem with the choir? That of St Hedwig’s Cathedral gave many concerts and sang in beautiful recordings. But in any case there was no problem with soloists. Those gathered for this series of concerts in December 1950 were of the first rank, even if they might initially seem a little heterogeneous.

The booklet itself is interesting. Alongside the long analysis of the work from the pen of “P.W.” (i.e. Peter Wackernagel), we find advertisements for three big commercial recording companies:

- on page 2: Decca, which had signed a number of major conducting names including Furtwängler — who however made only one record for this label, Brahms’s Second Symphony with the London Philharmonic.
- on page 8: Deutsche Grammophon Gesellschaft, with a general advert announcing its forthcoming catalogue of long-playing records; Furtwängler would make some records for them a year later.
- on page 11: Electrola (part of the EMI group), making no mention of its Furtwängler releases (of which there had been many since 1947), but highlighting a Ninth on Columbia 78s without identifying the conductor and orchestra — none other than Herbert von Karajan and the Vienna Philharmonic.

Finally, gourmands among our readers may like to note that Sarotti’s "Little Moor" chocolates and pralines, featured on the back cover, can still be enjoyed today. 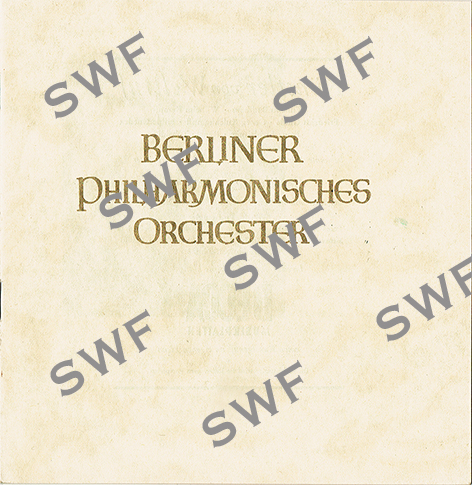