Programme For The Concert Of 10 December 1923, Berlin

The fifth of the "Ten Philharmonic Concerts" of Furtwängler’s second season offered subscribers an evening entirely devoted to Beethoven, as our conductor was often to do throughout his career. The interest here lies in the Choral Fantasia, which would reappear several times under his baton during this period, only to vanish completely from his repertoire after a performance at the Görlitz Festival in 1931 under the fingers of Edwin Fischer.

The featured pianist, entirely forgotten today, was Frieda Kwast-Hodapp. Frieda Hodapp (1880-1949) owed her double-barreled name to her marriage to the pianist, composer and teacher James Kwast. She had been a pupil of Max Reger —she gave the first performance of his Piano Concerto under the direction of Nikisch— and appeared for the first time with Furtwängler in 1914, during his tenure as music director in Lübeck.

The other participants in this work were the Bruno Kittel Choir, undoubtedly one of the best ensembles in Berlin alongside the Philharmonic Choir and the Sing-Akademie. Furtwängler regularly engaged them, and the Beethoven Ninth Symphony given in the spring of 1942 is a unique and striking testimony to their collaboration.

The printed programmes for successive concerts are not all alike; some provide little information, while others, including this one, give fuller documentation. While it provides no biography, it does feature the luxury of a Beethoven analysis from the pen of one of the finest music writers and critics of the time, Paul Bekker.

And page 4 will come as a surprise to many: the discs, which we consider today as "Polydors" or "Deutsche Grammophons", were certainly made by DGG, but bore the famous label showing Nipper listening to his master’s voice. 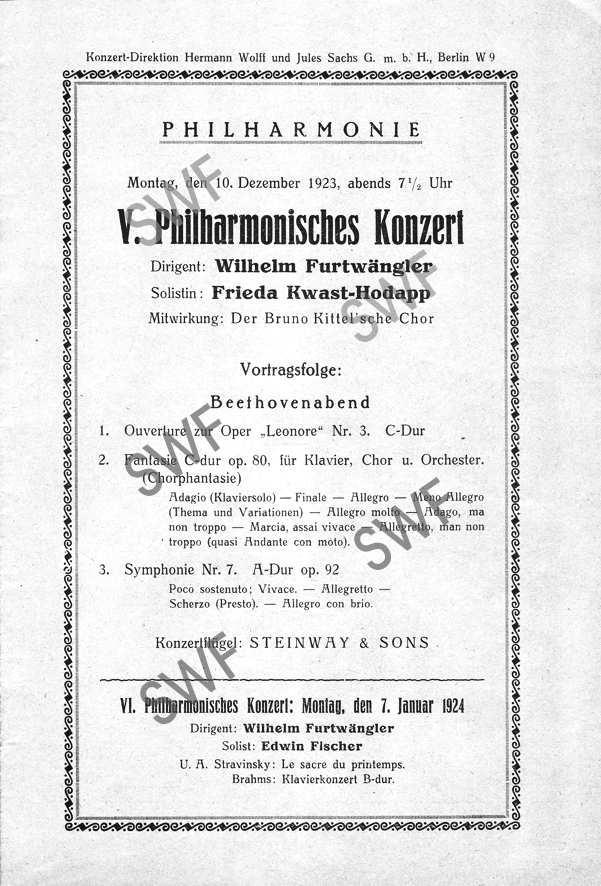