Programme for the concert by the Philharmonic Orchestra of Paris, 5 December 1938

In December 1938 Furtwängler was the guest of the Société Philharmonique de Paris, an orchestra directed by Charles Munch (1) for whom it had been created in 1935. This ensemble was disbanded soon afterwards (2), when Munch succeeded Philippe Gaubert at the head of the Paris Conservatoire Orchestra.

This was a special evening, to judge by the luxurious programme produced for the occasion, with its embossed and coloured lettering on the cover and pages of advertisements for a variety of prestigious brands, most of which are still famous names today.

The notes are the work of Fred Goldbeck, who was at that time one of the best commentators on Furtwängler on the Parisian scene; we are indebted to him for some remarkably intelligent observations on the great conductor’s work. He attended the concert with his future wife, the pianist Yvonne Léfébure, and the Goldbeck-Léfébure Collection in the Médiathèque Musicale Mahler in Paris now houses this magnificent document. The MMM scanned it for us, and we are very grateful for their kind permission to reproduce it.

(1) It is worth recalling that a dozen years earlier Charles Münch had held the post of leader of the Gewandhaus Orchestra of Leipzig, then conducted by Furtwängler. We might also note that in 1937, 1938 and 1939 the Philharmonic Orchestra of Paris took part in the summer festival at Royaumont Abbey, with its conductor for the first two years and Vladimir Golschmann for the third. In 1938 the programme included Bach’s concerto for two violins, the bows being held by Roland Charmy... and Charles Munch, who evidently had not yet completely given up his first vocation.

(2) This name was however already in use in the late 1920s, particularly for records, and was later used for individual events such as those mentioned above. It would be fair to question whether the orchestra was even still formally in existence at the time of Furtwängler’s concert in December 1938. 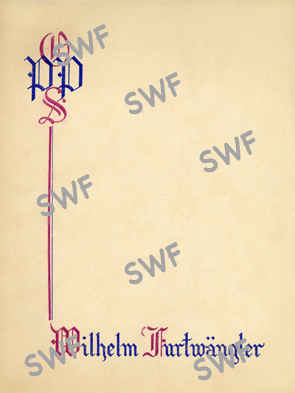