A novelty from Japan

The Wilhelm Furtwängler Centre of Japan is releasing a 3-CD box set dedicated to Beethoven with the BPO. WFHC-044/6 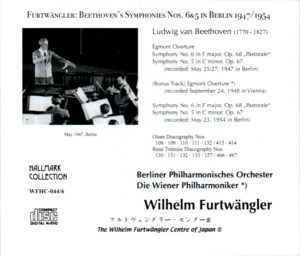 It includes a well-documented booklet, with a text by Henning Smidth, and CD-sized facsimiles of the programmes for one of the 1947 and 1954 concerts.

First, let's discuss the unpublished material. The boxed set announces Egmont, VPO, 24 September 1948, in Vienna. Although this recording was documented, it was considered dubious. Henning Smidth, in his text, gives a very sensible explanation which we think can be accepted. Considering the acoustics, it would be a recording of one of the concerts in the VPO's Beethoven series at the Albert Hall in London (from which the 2nd Symphony is taken), which would date it from 28 September 1948.
Anyway, one can recognize Furtwängler's signature, unfortunately in a rather bad sound (background noise, drop out, weeping, saturations...). And to make matters worse, the beginning is missing, about 15 sec. — which is not indicated on the box! — hence a certain disappointment.

The WFCJ announced that they set the band speed to the pitch of 443 Hz. The board of the SWF does not share this view. It is true that the BPO is now 443, but Karajan came along... In Furtwängler's time, the reference A was at 440 Hz.