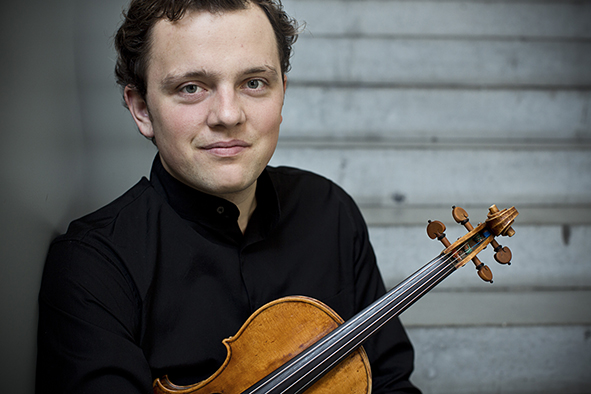 1- Philipp Bohnen, you are a violinist with the Berlin Philharmonic as are the other members of the Quartet. One question immediately comes to mind: does the name Furtwängler still mean something for a Berliner of today?
Yes, of course it does. Wilhelm Furtwängler is until today as present in the memory of the orchestra as Herbert von Karajan, also to the younger generation of us musicians.
Just in the beginning of June we played with Daniel Barenboim who talked a lot about Furtwängler. How he had played for him, how Furtwängler invited him to come and see his rehearsals and learn from him. Furtwängler made a deep impression on Maestro Barenboim and he is a very regular guest and the first honorary conductor of our orchestra. And in Mr Barenboim mind and ears he still hears the interpretations of Wilhelm Furtwängler, as he said. And so through Maestro Barenboim who of course brings also so much of his own ideas, Wilhelm Furtwängler's music can in a way still be heard today.

2- Is it easy to reconcile your duties with such an orchestra and your work within the Quartet?
For us musicians of the Berlin Philharmonic it is of course the most important thing to play in the orchestra and to do so at the highest possible level. But a lot of our colleagues do chamber music in all different kinds of groups. We as a quartet feel that both Ensembles help each other.
As a quartet we benefit a great deal from our work within the orchestra. We are very inspired by the colors our colleagues play for example their wind solos with and also the power of such a string sections as we have it in the orchestra, is something not every quartet has as a musical background. So the inspiration of that is amazing.
But we also feel, that playing in the quartet helps us in the orchestra. When we study our quartet repertoire, we usually have a lot more time to work on little details. We take our time to really become one instrument and those musical experiences are very precious and fulfilling.

3- Unless I am mistaken this is the first time you will have performed in France. Does this have particular significance for you?
Yes, that is true, we will perform for the first time in France and we are really looking forward to it. We know from our concerts with the Berliner Philharmonic how fantastic it can be to play for the audience in France. I always feel that people listen with very open ears and therefore are open to new ideas. At the same time you always feel the very warm atmosphere in the halls.
And to perform in Paris, one of Europe’s and the world’s cultural capitals, is really a dream come true. Also because of our name patron Varian Fry.

4- More generally, what repertoire are you working on? Does the music of today feature among your concerns?
The repertoire of our quartet world is so rich and amazing, that we do not want to either focus on something particular nor rule something completely out. We try to create concert programs that make sense together. Usually, we like to combine repertoire of different times. The music of contemporary composers can be very good, challenging and exciting. We haven’t had too many contemporary composers in our concert repertoires yet but there is definitely more to come in the future.

5- I am not sure the name Varian Fry is well known in Germany, but neither is it in  France. Would you tell us something about it?
Varian Fry was an American journalist who helped over 2,000 people to flee from the Nazi regime during the Second World War. He was based in Marseille and organized a whole network of helpers. He saved artists, writers and composers such as Hannah Arendt, Lion Feuchtwanger, Klaus Mann, Franz Werfel,  Marc Chagall and Bohuslav Martinu. And of course many many more.
The city of Berlin named a street after him and that is how we first found out about him because that street is located very close to the Philharmonie. For us, our name is very important because of two reasons: We honor a man who was so brave to put his own life at risk to save others, and the 'Varian Fry Strasse' is very close to the Berliner Philharmonie, our musical home.
We would feel most honored if us taking Varian Frys name helped a little bit, not to forget him and maybe for some people to get to know him and to be inspired by his bravery.